ORATORY OF THE COMPANY OF SANIT CATHERINE OF THE NIGHT

A VISIT TO THE ORATORY

This evocative space is located in the heart of the thousand-year-old hospital of Santa Maria della Scala, one of the most ancient hospitals in Europe, called Saint Mary of the Stairs because it stood across from the steps to Siena Cathedral. Founded in the ninth century by the cathedral canons as an expression of God’s love for those in need, this charitable institution was first and foremost a hostel for the many pilgrims passing along the Via Francigena, as well as a place of welcome for the poor in search of alms and for abandoned children, the so-called ‘foundlings.’ Over time, to these aims was added the care and treatment of the sick, to the point that the fourteenth-century bylaws bear witness to the permanent presence of a physician, a surgeon, and an apothecary.

Such a place, where faith was expressed in the judgment of one’s neighbor, could not help attracting Catherine, who came here every day, bringing aid and comfort to those in need. This shows how she interpreted Christian charity in an active, concrete way: she embodied the role of volunteer nurse par excellence, full of love and unflagging energy. With her little jar of aromatic essences, her lantern and a walking stick, which can still be seen in the shrine of her house, she would go to the hospital, alleviating the physical and spiritual suffering that afflicted the sick.

In the course of the fourteenth century, several lay confraternities, the most important of which were San Michele Arcangelo and the Disciplinati, set up their headquarters in the underground rooms of the hospital. Founded for benevolent and charitable purposes, they transformed a part of this space into proper oratories, which were the places where the brothers would go to draw on the source of their love, God’s grace. Here they would stop to pray, and meet to maintain the reasons for their service.

The ancient Company of San Michele Arcangelo had its headquarters in this oratory. It was dedicated to the care of the sick and respect for the dead. It is no coincidence that this space is located near the ‘charnel house’, still visible today, a pit where the dead were buried. The titular saint of the confraternity, Saint Michael the Archangel, is the one who accompanies souls to the next world.

Catherine came here every day to pray with the brothers and to seek a moment of rest during the long nights spent at the bedsides of the sick in Santa Maria della Scala, retiring into the little cell on the left side of the oratory. Even though Catherine never became a member of the Company – membership was open only to men – in honor of her and as a sign of her bond with the brothers and with the place that was so dear to them, the name of the Company was changed to Santa Caterina della Notte (Saint Catherine of the Night), as attested by documents, starting in 1479. 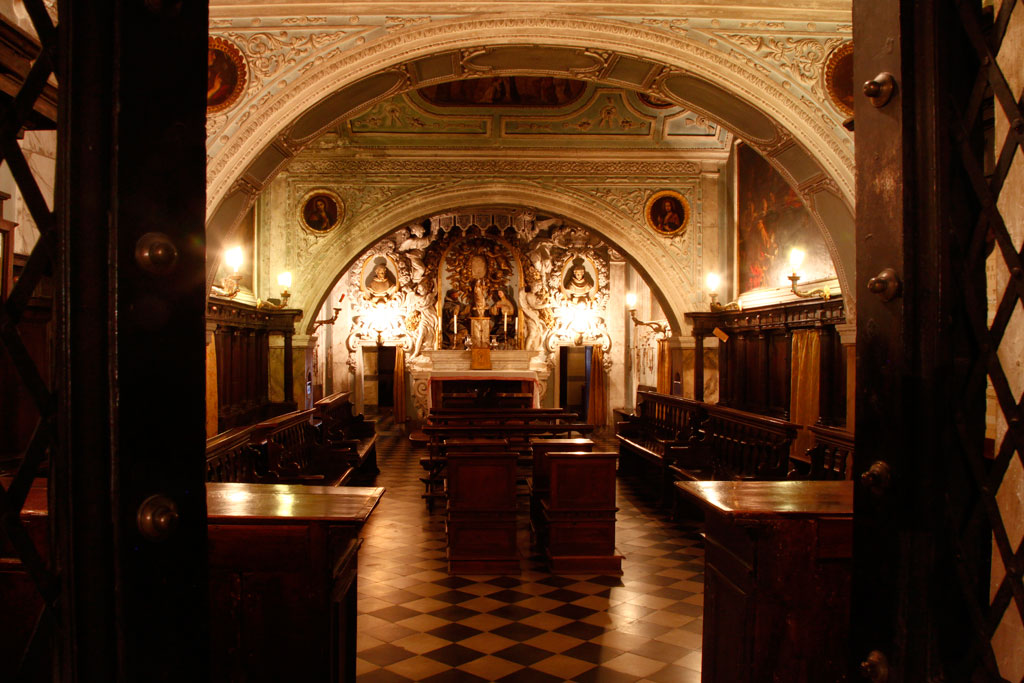 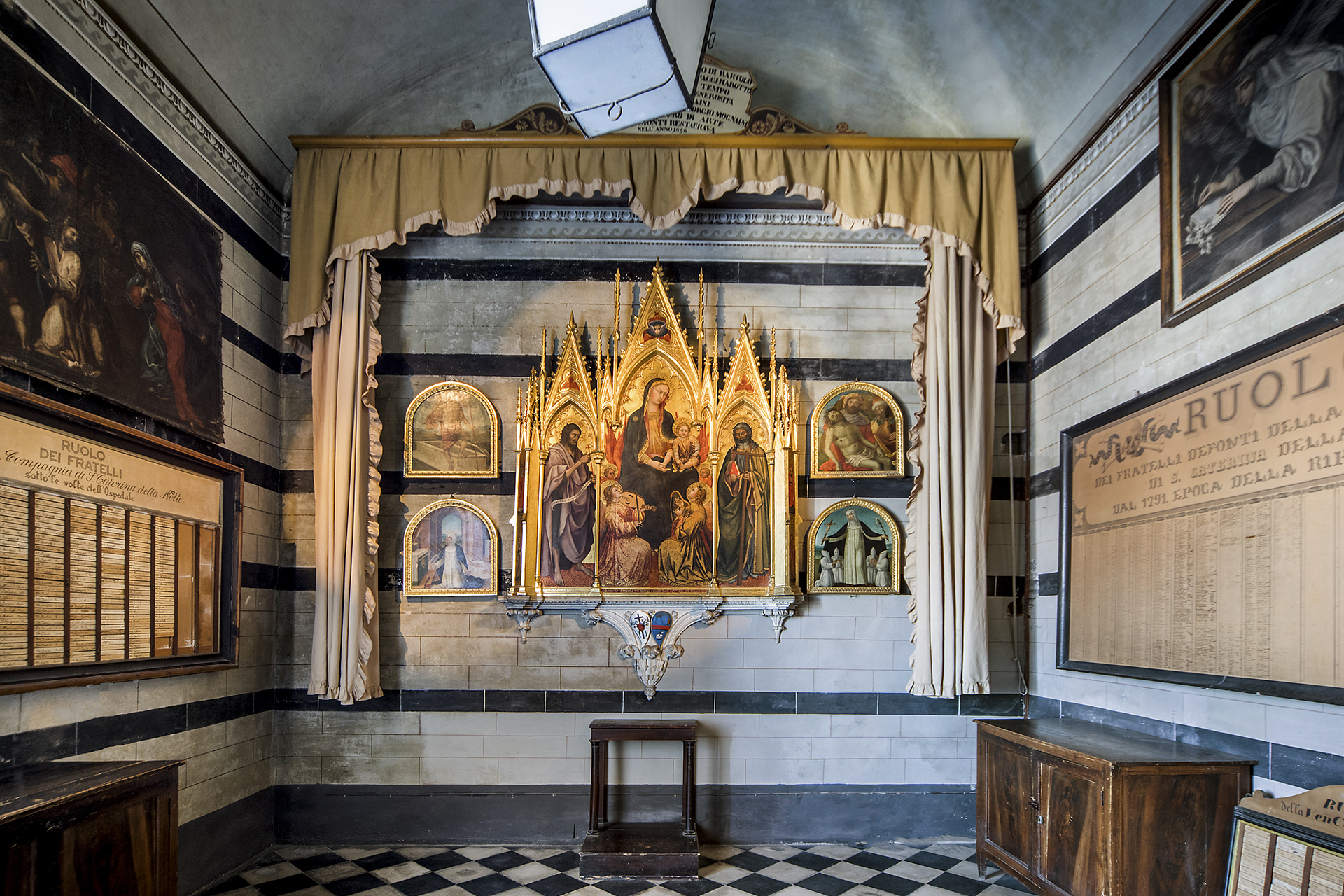 A visit to the oratory

After crossing the entrance vestibule, you come into the oratory itself. Its appearance reflects the typical characteristics of a confraternity oratory: a single nave, with along the walls (except the back wall) wooden stalls dating to the sixteenth century, where the brothers would sit during assemblies. The seats against the entrance wall were generally reserved for the members who governed the Company.

The space is divided into three bays, covered by vaults decorated with late seventeenth-century stucco ornamentation which becomes richer close to the altar. This frames a heterogeneous series of paintings on various subjects and by artists who for the most part remain unknown, some on wooden panels and others on canvas. In some cases these are fragments of lost works, and all can be dated between the sixteenth and eighteenth century. The overall impression is of a disjointed collection mounted temporarily, awaiting a more suitable arrangement which never happened.

The subjects of the paintings placed along the walls are episodes from the life of Christ, the Virgin Mary, and Saint Catherine. The entrance wall presents two eighteenth century canvases, one on the right and one on the left, showing respectively Jesus Appearing to Catherine in the Guise of a Poor Beggar, a fairly frequent theme in the iconography of the saint, and Catherine Drinking from Christ’s Side the Blood of Redemption, the spirit’s ‘true nourishment’ and the bearer of salvation and eternal life. The large canvases on the side walls of the first bay illustrate, on the left, The Nativity of Jesus, and on the right, The Adoration of the Magi. In the next bay are The Birth of the Virgin, and the Dormition, both painted in the late seventeenth century.
In the third and last bay, Saint Catherine is the theme once again in two canvases, both painted in the eighteenth century. The one on the right shows The Beheading of Niccolò di Tuldo, a subject present also in the chapel dedicated to the saint in the Basilica of San Domenico; it refers to an episode featuring a gentleman named Niccolò who, unjustly sentenced to death, fell into a state of profound desperation. In prison, he was visited by Saint Catherine, whose words, inspired by divine grace, comforted him to the point that he let himself be led to the scaffold “like a meek lamb.”
The scene on the left shows Catherine in Front of the Pope at Avignon, one of the most meaningful moments in her life, so important that it affected the fate of the papacy and of the Church. Thanks to her exhortations, the pope returned to Rome, putting an end to the Avignon captivity which had lasted more than seventy years.

Below this painting, through a grille, you can see the small cell next to the oratory where Catherine would allow herself a few moments of rest on the bare stone during the long nights she spent caring for the sick in the hospital. In memory of this, a polychrome terracotta statue of Saint Catherine Sleeping has been placed in the cell. This work was long held to be by Vecchietta, but in reality it should be attributed to a more modest artist and a later period, probably in the seventeenth century.

The back wall of the oratory, a striking sight because of the great profusion of stucco decorations, holds the high altar where, under a canopy supported by four angels, Saints Dominic and Catherine adore a small marble sculpture of the Virgin and Child, a work by a northern artist of the late fourteenth century which, considering also the prominent position it occupies, may be the oldest devotional image belonging to the Company.

The visit concludes in the room adjacent to the sacristy, where a very beautiful gold-ground triptych of the Virgin and Child with Saints John the Baptist and Andrew is mounted on the wall. By Taddeo di Bartolo, it is dated 1400. To its sides hang four head- and foot-boards of coffin stands showing Saint Catherine Protecting Four Confraternity Brothers with her Cloak, Saint Catherine with the Stigmata, and the Deposition and Resurrection of Christ. They were painted by a Sienese artist, probably Giacomo Pacchiarotti, in the early decades of the sixteenth century.

Besides the confraternity of Saint Catherine of the Night, the other important lay company with headquarters in the underground rooms of the Hospital was that of the Disciplinati (Flagellants). This company was founded, in all probability, during the thirteenth century, the period in which its first statutes were issued, but its legendary origins went back to the early Middle Ages, if not even to the time of Saint Ansanus, the baptizer and patron saint of Siena, who died a martyr, according to the tradition, in the nearby street of the “Fosso” (ditch) which now bears his name. The bylaws dictating the requisites for admission and belonging to the company demanded a rigorous selection of the persons aspiring to membership, chosen from among the most authoritative figures in the ruling class of Siena, who were required by the strict, highly detailed rules to follow an austere way of life, but they also enjoyed great prestige as political counselors and administrators of public charity. Furthermore, the adoption of an insignia with the cross and two ‘disciplines’ (whips) hanging from it symbolized the full adherence of the brothers to the sacrifice of Christ and the penitence of flagellants.
Between the thirteenth and fourteenth centuries the Company counted among its members some outstanding personalities in Sienese mysticism, such as Saint Bernardo Tolomei and the Blesseds Andrea Gallerani, Pietro Petroni, and Giovanni Colombini, as well as a group of disciples of Caterina Benincasa, including Gabriello di Davino Piccolomini, Sano di Maco Ianaiolo, and Stefano di Corrado Maconi. In 1379, after the outbreak of the Western Schism, Saint Catherine wrote to the prior and the brothers of the Company, exhorting them to support the cause of Pope Urban VI against the antipope Clement VII not only “spiritually” with their prayers, but also “temporally” by using all their influence to persuade the Sienese government to support the “true vicar of Christ.” At the beginning of the fifteenth century, before entering the Franciscan order, the young Bernardino degli Albizzeschi (Saint Bernardine) belonged to the confraternity, and his vocation matured in his assistance to the plague victims in the hospital upstairs.
During the age of the Counter-Reformation, the Company was a center of worship, officiated frequently and regularly by five chaplains, the number of altars in the oratory, while the brothers distinguished themselves for their works of charity in favor of indigents, prisoners, and the neediest religious organizations. Its assets grew as a result of numerous donations and legacies made between the sixteenth and eighteenth centuries by various Sienese patricians for the salvation of their souls, so much so that in 1783, when it was decided to levy a special tax to contribute to the reform of the University of Siena, the Company was taxed as the institution that was by far the richest among all the religious organizations of the time. Two years later, however, the suppression of the lay confraternities in Tuscany decreed by the Grand Duke’s government spared the patrimony of the Company, which was changed into a secular institution with the new name of “Società di Esecutori di Pie Disposizioni” (Society of Executors of Charitable Directives), the association which for more than two centuries, up to the present time, has continued to exercise important social and economic functions in Siena and the territory of the ancient republic.
The numerous rooms of the Society’s headquarters, located very close to the oratory of the Company of Saint Catherine of the Night, contain a significant collection of art works, which was enriched several years ago by the discovery of an interesting early fourteenth-century fresco cycle illustrating the Thebaid, which came to light along the stairs leading to the Society’s headquarters. Among the other art works, especially noteworthy is the beautiful wooden Crucifix above the left altar of the oratory, which according to tradition led Saint Bernardine to don the habit of the Franciscans. 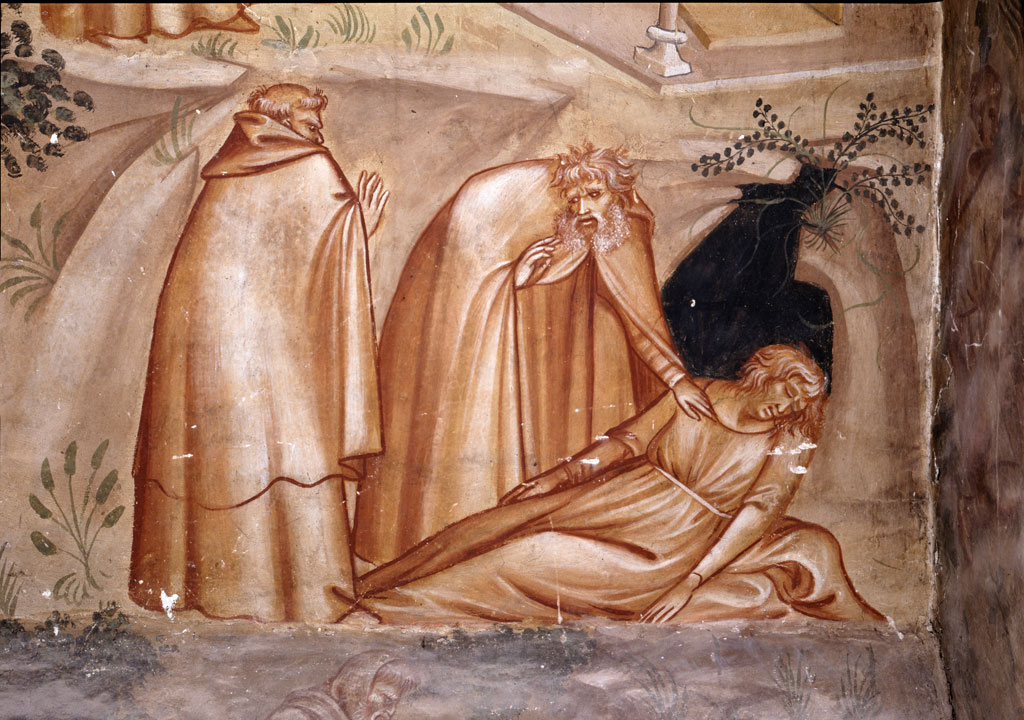