This is where Catherine, at the age of just seven, had her first vision. While she was walking home from Fontebranda with her brother Stefano, she saw Jesus wearing papal robes seated on a throne above the basilica of San Domenico, which looms large in view of the street. With Him were Saints Peter and Paul, the Princes of the Apostles, and Saint John the Evangelist.

This vision left a deep mark on Catherine’s soul, and later she understood its meaning: that she would embrace the Dominican Order, becoming a Tertiary, and would have as one of her greatest concerns the exhortation to the pope to reclaim awareness of his true mission and to act according to what he was, “sweet Christ on earth.”

From the eighteenth century the Sienese wanted to hand the memory of this vision down to posterity in a fresco placed along the street, painted by Giuseppe Nicola Nasini. Its location in the open air, and thus exposed to the elements, is the reason for the tormented life of this work, which in the course of time has been redone three times. The first was by Cesare Maffei, then Vittorio Giunti, and finally Enzo Cesarini, who painted the fresco as it currently appears; it was presented to the public on 1 October 1972 and protected by a glass case. On this occasion the old Latin inscription under the picture was replaced with a new inscription in Italian carved on a plaque made of yellow Sienese marble, with the words from the Legenda Major by Raymond of Capua recounting the episode. 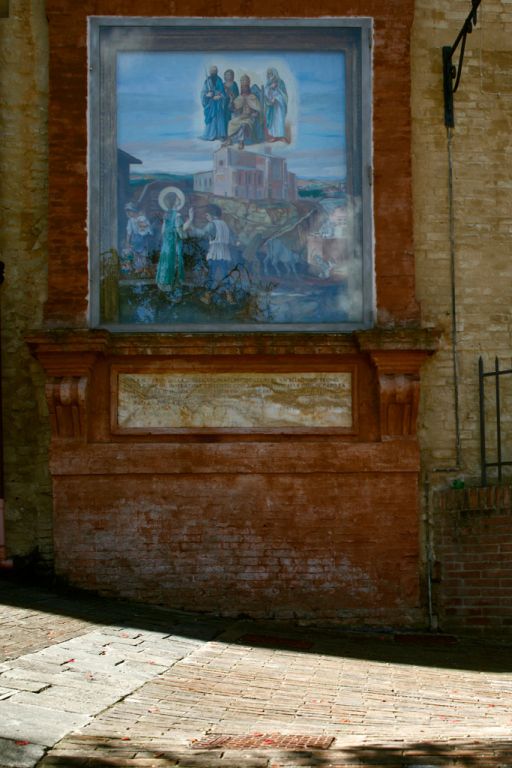 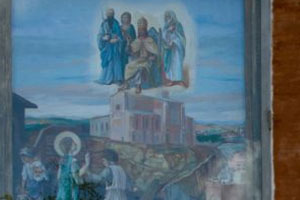