This public fountain, the oldest in existence in Siena, brings us into the social context in which Catherine lived, making her be remembered as the saint of Fontebranda.

The presence of the foundation had made this area one of the nerve centers of Sienese daily life, because of the great importance water had for the city. Siena is built on arid hills, far away from waterways and mountain peaks. For this reason, since ancient times the lack of water forced its inhabitants to make strenuous efforts, testified still today by the extraordinary web of underground aqueducts patiently dug through the rock; these are the bottini, so-called because covered by barrel vaults (botta = barrel), which fed water into the city’s fountains, wells, and cisterns. One of the ‘main bottini,’ the most important aqueducts in the system, was this very one at Fontebranda.
Consequently, the water in this fountain was especially abundant and for centuries quenched the thirst of half the city, including Catherine and her family. The fountain also guaranteed sustenance to her father’s business, which drew from it the water necessary for dyeing cloth.

The existence of a fountain on this site is documented as early as A.D. 1081, but in 1193 it was rebuilt and expanded by a certain Bellamino, as an inscription still present inside it attests. Several decades later, in 1246, the cross vaults were built, and on the façade of the fountain four stone lions were placed, with water spouting out of their mouths.

Like the most important fountains in Siena, Fontebranda has three capacious vats, which in the past had three different functions: the first contained drinking water, the second, fed by the overflow from the first, was used as a drinking trough for animals, and the third was used for laundry. From here the water flowed into the so-called ‘clean sewer’ and was used by the numerous dyeing and tanning operations in the neighborhood and by the mills just outside the city walls. 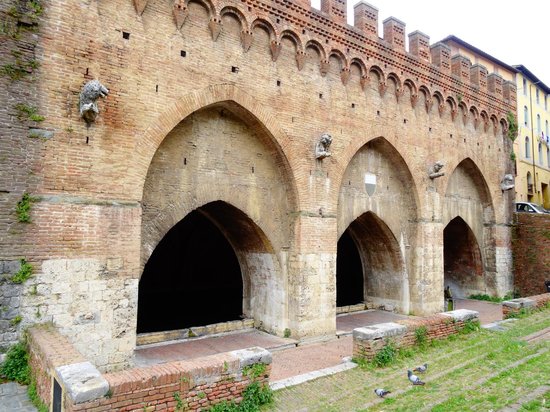